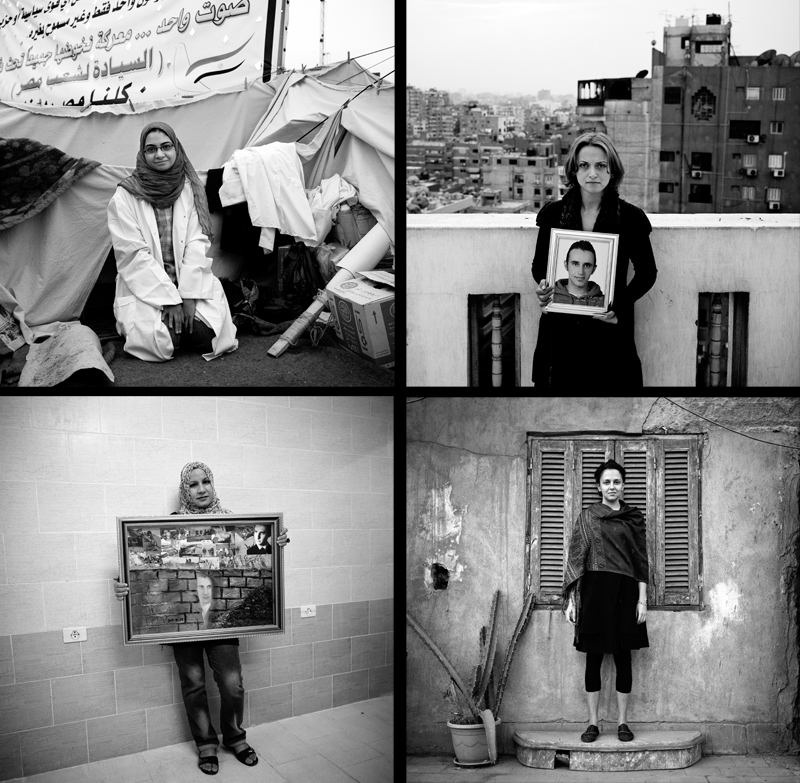 Top Right: Zahraa Kassem, 33, is the sister of Khaled Said who was beaten to death by Egyptian security forces and is said to be "the spark" for the Egyptian Revolution. A Facebook group titled "We are all Khaled Said," brought attention to his death and contributed to growing discontent in the weeks leading up to the Egyptian Revolution which began in February. Zahraa began protested in June 2010, after the death of her brother in their hometown of Alexandria.

Top Left: Dalia, 28, is a pharmacist and has spent the past week volunteering in Tahrir Square at a makeshift clinic. She said, "Military attacked the makeshift hospital with teargas."

Bottom Right: Jasmina Metwally, 29, is an artists based in Cairo. Originally her work focused on conceptual painting, but during the revolution, she began doing video work with a documentary purpose. “There are things happening around us, I needed to do things for a purpose and it needed to reach an audience. Art is more conceptual; documentary is reaching more people, to rescue the revolution. I kept it straightforward, I was trying to send a clear message."

Bottom Left: Nadia El Bergli, 28, is the manager of "Grains of Hope" which was created on the 1st of July. The group is comprised predominantly of women who make food for the rebels on the front line, approximately 300 meals a day. Nadia's younger brother Abdel Adem was detained by troops loyal to Colonel Muammar Gaddafi on April 4th. She holds a collage that she made depicting her brothers time in detention.