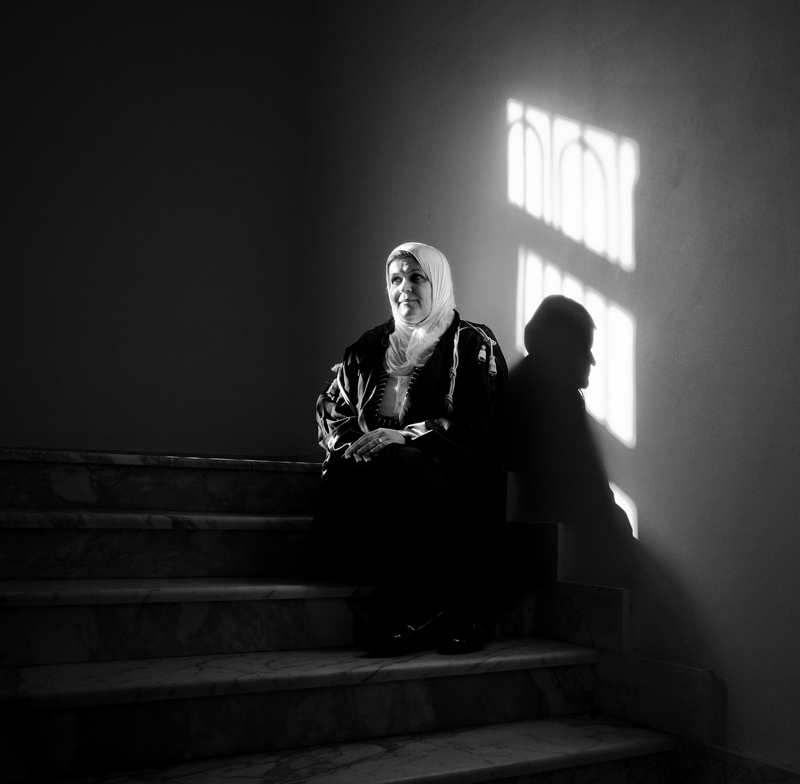 Judge Thuraya Algadmsi, 47, studied the criminal and police side of law and worked for Gaddafi’s regime as a judge. She burned her judge’s robe on February 17th, 2011. While she was studying law at University, she was surprised that women were not allowed to be judges or court investigators. It wasn’t until 1989, the year that she graduated that Gaddafi granted women the opportunity. “I began working in the investigating department, as you cannot be a judge until you are thirty years old. I became a judge in 2001, specifically in marriage cases, looking at what could help the women. I chose this specifically to help the Libyan women. I wanted them to know that they had rights. I’m a mother and a wife; I understand these issues. I would always ask the women to be present in the courtroom for divorce cases. There were many laws in the past regime that were supporting women. In divorce, the woman has the right to the house, and women have the right to work, there were many things supporting them. My fear is if religion gets involved in law they will take these away. Under Gaddafi, there was no sharia law but now there are many parties, and communities wanting to reform the constitution to take these laws out supporting women. I’m worried about the law that allows men to take a second or third wife without asking his first wives permission and women’s custody right’s over their children. If these laws are changed, we won’t be moderate anymore. Let’s hope that we will not be like Iran. We are currently creating many civil societies to define these laws. We will not let them remove it. That’s why we are getting ourselves ready and stronger to flight for these. What if after 22 years they remove the right for women to be judges? I would lose my job after all these years. I think the Libyan woman was always in the house, now after the revolution she is more public. She can speak loudly now! It was us pushing the Libyan men out the door to fight. This new generation won’t keep silent and watch if there is something they don’t like. In the beginning, I’m sure that woman won’t take a large percentage of parliament, but hopefully in the future it will be better. The revolution means change for the better and I wanted to see every moment of the revolution. Even me, inside my personality has changed. I’m not afraid of anything now. I need to continue to fight for what is right and I know the next generation of women will be able to carry out even more.” Currently Judge Thuraya is working as the manager of the legal office of the NTC’s Ministry of Affairs of the Families Martyrs and Missing which was created to care for, support and assist the families of Martyrs and the missing in their social, educational and health needs. Their aim is to search for and identify all reported missing people inside and outside of Libya.