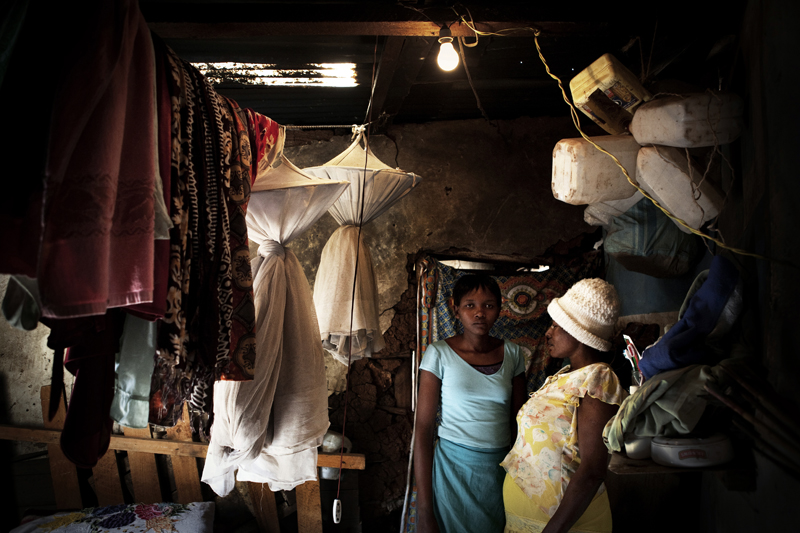 KIBERA SLUM – JULY 20: A 46 year old Kenyan woman stands with her eldest daughter in their one room home in the slum of Kibera in Nairobi, Kenya on July 20th, 2010. Though she has never been married she has four children, 22, 18 and 14 year old twins. During the day she runs a small restaurant, but it's not enough to support her family; at night she is a sex worker. Men will pay her 200 Kenya shillings to sleep with her when they wear a condom, and 500 Kenya shillings when they do not. She is HIV positive and guesses that the men who do not want to wear a condom are too, though she never tells them of her status. Nine months ago she procured her 3rd unsafe abortion in Kibera. She paid 200 Kenya shillings to a woman who used a soda straw to blow a liquid into her uterus, inducing labor. She was 6 months pregnant. Many single women in Kenya living in slums like Kibera live day to day, and do not have the money upfront to pay for a termination. By the time women have raised the funds to pay for such a procedure they can be 6 to 7 months pregnant. "It is very scary, I may die and leave my children alone, but am forced by my circumstance. I cannot afford another child." After her 3rd abortion she developed fibroids, a benign tumor of the uterus, which can cause prolonged bleeding, pelvic pressure and pain. She has been bleeding for the last 9 months, but cannot afford the operation to fix it.